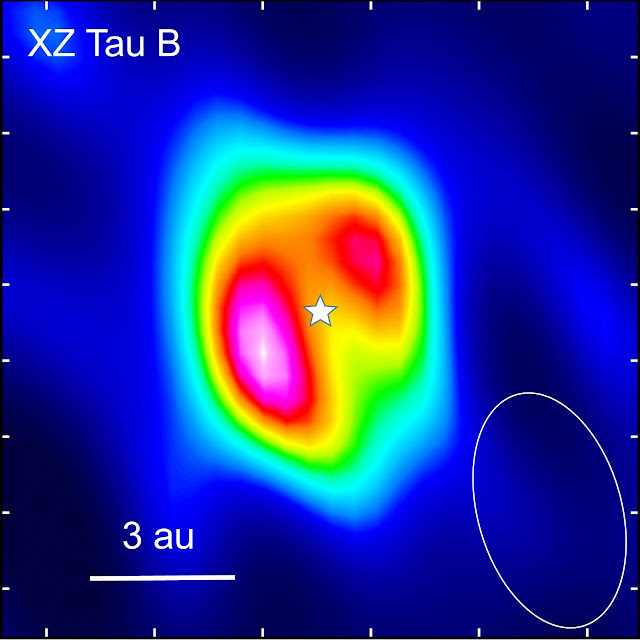 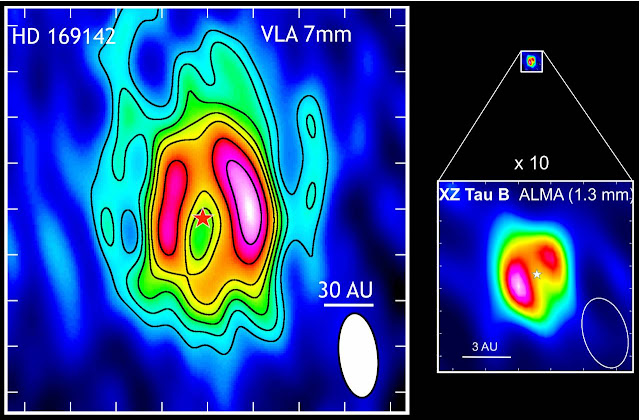 Comparison between the XZ Tau B disk and the disk around star HD 169142, of normal size.
Source: Osorio et al.

In the course of the last few decades, the discovery of thousands of planets around other stars has unveiled a wide variety of planetary systems whose architecture defies our understanding of planet formation. The search for disks of gas and dust around young stars, from which planetary systems stem, is fundamental to explain newly observed worlds, and a recent finding confirms that miniature systems can exist.

The discovery, made by an international team led by researchers from the Institute of Astrophysics of Andalusia  (IAA-CSIC), was made in the vicinity of XZ Tau B star which, with less than five million years of existence (the Sun, for comparison, is five billion years old), is so young that it has not yet completed its contraction process.

"This young star is surrounded by a disk of gas and dust only three Astronomical Units in radius, with a central cavity which seems to have been created by protoplanets orbiting around it, says Mayra Osorio, IAA-CSIC researcher in charge of the project. One Astronomical Unit is the equivalent of the distance from the Earth to the Sun (150 million kilometers). In comparison, the typical size of disks studied so far oscillated between fifty and a hundred astronomic units".
With a size tens of times smaller than our Solar System, which is about one hundred Astronomical Units long, the disk around XZ Tau B not only confirms the models that indicated that dwarf disks could exist but it also fits the finding by the Kepler satellite of extremely compact systems, containing various planets the size of the Earth (or several Earths) orbiting around their star inside a space no bigger than one Astronomical Unit.

"The XZ Tau B disk could therefore be the precursor to these types of compact systems and suggests that there could be a great number of very small protoplanetary disks left to discover”, says Enrique Macías, IAA-CSIC researcher involved in the finding. "Highly sensitive instruments with a high spatial resolution such as ALMA, with which we have studied XZ Tau B, are allowing us to study systems that now seem borderline but which are undoubtedly much more common than we used to think".

The XZ Tau B disk displays, moreover, two very interesting traits. First, its small size implies that it will develop between fifty and five hundred times faster than bigger systems. "Changes which in heretofore observed disks would take decades or centuries to observe will occur here in a matter of months. It is one of the very scarce phenomena in Astrophysics where a full monitoring could be carried out in human time scales”, says Mayra Osorio (IAA-CSIC).

The second characteristic trait of this disk resides in its belonging to a triple stellar system. “It is known that the existence of companion stars influences the size of protoplanetary disks, so the in-depth study of this small disk will bring information not only about how planets are formed but also about how multiple star systems emerge and evolve over time,” says Enrique Macías.