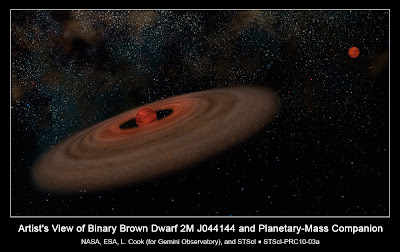 This is an artist's conception of the binary system 2M J044144 showing the primary brown dwarf that is estimated to be approximately 20 times the mass of Jupiter (at left) and its companion that is estimated to be 7 times the mass of Jupiter (at right). The disk of the primary likely never had enough material to make a companion of this mass. As a result, this small companion probably formed like a binary star. In this illustration, both objects are presented at the same distance to show relative sizes. Not shown are two other nearby objects, a low-mass star and a brown dwarf that are probably both parts of this system. Science Credit: NASA, ESA, and K. Todorov and K. Luman (Penn State University). Artwork Credit: Gemini Observatory, courtesy of L. Cook. 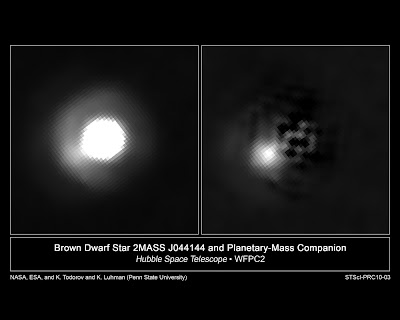 This is a Hubble Space Telescope image of young brown dwarf 2M J044144. It has a companion object at the 8 o'clock position that is estimated to be 5-10 times the mass of Jupiter. In the right panel, the light from the brown dwarf has been subtracted to provide a clearer view of the companion object. The separation of the companion corresponds to 1.4 billion miles at the distance of the Taurus star-forming region, which is only about 1 million years old. The companion may be a very small brown dwarf or a large planet, depending on how it formed. Images were taken with Hubble's Wide Field Planetary Camera 2 to track the motion of the two objects to see if they actually do travel across space together. Additional observations were done with the Gemini North telescope on Mauna Kea, Hawaii. Credit: NASA, ESA, and K. Todorov and K. Luhman (Penn State University)
As our telescopes grow more powerful, astronomers are uncovering objects that defy conventional wisdom. The latest example is the discovery of a planet-like object circling a brown dwarf. It's the right size for a planet, estimated to be 5-10 times the mass of Jupiter. But the object formed in less than 1 million years — the approximate age of the brown dwarf — and much faster than the predicted time it takes to build planets according to some theories.
Kamen Todorov of Penn State University and co-investigators used the keen eyesight of the Hubble Space Telescope and the Gemini Observatory to directly image the companion of the brown dwarf, which was uncovered in a survey of 32 young brown dwarfs in the Taurus star-forming region. Brown dwarfs are objects that typically are tens of times the mass of Jupiter and are too small to sustain nuclear fusion to shine as stars do.
The mystery object orbits the nearby brown dwarf at a separation of approximately 2.25 billion miles (3.6 billion kilometers — which is between the distances of Saturn and Uranus from the Sun). The team's research is being published in an upcoming issue of The Astrophysical Journal.
There has been a lot of discussion in the context of the Pluto debate over how small an object can be and still be called a planet. This new observation addresses the question at the other end of the size spectrum: How small can an object be and still be a brown dwarf rather than a planet? This new companion is within the range of masses observed for planets around stars — less than 15 Jupiter masses. But should it be called a planet? The answer is strongly connected to the mechanism by which the companion most likely formed.
There are three possible formation scenarios: Dust in a circumstellar disk slowly agglomerates to form a rocky planet 10 times larger than Earth, which then accumulates a large gaseous envelope; a lump of gas in the disk quickly collapses to form an object the size of a gas giant planet; or, rather than forming in a disk, a companion forms directly from the collapse of the vast cloud of gas and dust in the same manner as a star (or brown dwarf).
If the last scenario is correct, then this discovery demonstrates that planetary-mass bodies can be made through the same mechanism that builds stars. This is the likely solution because the companion is too young to have formed by the first scenario, which is very slow. The second mechanism occurs rapidly, but the disk around the central brown dwarf probably did not contain enough material to make an object with a mass of 5-10 Jupiter masses.
"The most interesting implication of this result is that it shows that the process that makes binary stars extends all the way down to planetary masses. So it appears that nature is able to make planetary-mass companions through two very different mechanisms," says team member Kevin Luhman of the Center for Exoplanets and Habitable Worlds at Penn State University. If the mystery companion formed through cloud collapse and fragmentation, as stellar binary systems do, then it is not a planet by definition because planets build up inside disks.
The mass of the companion is estimated by comparing its brightness to the luminosities predicted by theoretical evolutionary models for objects at various masses for an age of 1 millon years.
Further supporting evidence comes from the presence of a very nearby binary system that contains a small red star and a brown dwarf. Luhman thinks that all four objects may have formed in the same cloud collapse, making this in actuality a quadruple system. "The configuration closely resembles quadruple star systems, suggesting that all of its components formed like stars," says Luhman.
CONTACT